Discover
to Miguel Delibes
in the cinema and theater

Apart from his relationship with the cinema due to the constact adaptation of his novels, Delibes has another facet not so well known and that I would like to point out here: I´m referring to his work as a cinema critic in the newspaper El Norte de Castilla, indeed in his first phase an editor of that newspaper. Delibes himself always said that those critiques were never too professional, they just cover punctual need of the newpaper at an urge moment; but I am sure that if we revise them carefully, we could doubtless find interesting elements that very likely will match with the notable cinema interest that Delibes always showed. I can personally give prove of this since I know about his constanct participation in the Semana del Cine de Valladolid (SEMINCI), and his presence in the periodical cinema cycles that were yearly organize as well as his frequent assistance to the proyection of movies in the local theaters in Valladolid. I would even dare to say that his fondness in cinema provoke an influence in a double way: the precise character of his novels to be adpted to the language of the cinema and the influence, that I consider, the language of the cinema had on some of the narrative works of Delibes. 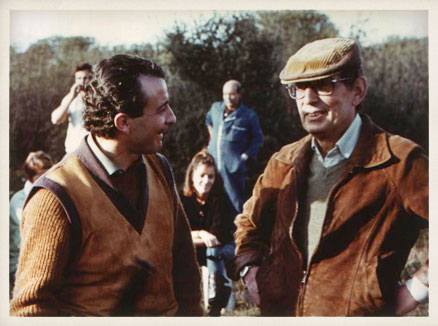 Miguel Delibes con Juan Diego. Rodaje de Los santos inocentes, 1984.
When I read Los santos inocentes I was shocked by the strenght and the virtue of Miguel Delibes, on the other hand I find those characteristics frequent in other Spanish writers from the fifties: their extraordinary listening skills… They are writers who listened in a wonderful way to the people in bars, on the streets, on the fields, and when they make the characters of their novels speak, we can immediately recognize them, they are plausible and authentic characters…

Working with any of the texts from Delibes offers a great advantage, and everyone who has done so owe him, since you can learn an essential lesson: the essential concept itself. Delibes always writes straight to the point, he has the skills to find in his writing the key to reach the sensibility, and goes straight to the heart and the intelligence of the reader. His capacity to hint at concepts is amazin. He offers a vision of life and the world that can seem objective and realistic, but the truth is that the vision is a very personal interpretation in which plays a key role the election and description of characters and situations, highlighting some of them and hiding other in such a way that the created situation and the generated emotion by this situation reaches out fully and straight. Even when it comes to select- cinema and television must select and summarize the literary work- the language in Delibes is so fertile that offers yu a wide varity of possibilities each of them more versatile and convincing. 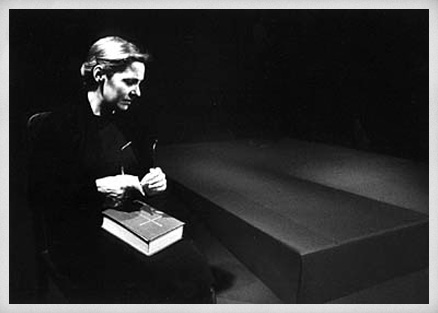 La actriz Lola Herrera representando Cinco horas con Mario, 1979.
From the Novel to the theater is the title of this afternoon´s round table. Of the novel from Miguel Delibes to the theater that is ased on those novels. As you all know, Miguel Delibes, apart from being a great novelist, has lived the experiences that some of his novels have been adapted to the theater play having great success and public acceptance and critique and also had the virtue that the adaptation from novel to play they managed not to lose their communication with the audience, neither their fresh language nor the strength and emotional humanism of their extraordinary characters.

Recently I returned from the beautiful village of Alburquerque, in Extremadura, where Mario Camus has been filming a movie base don my novel “Los santos inocentes”. This little excursion has been very productive for me, since on the one hand I have been able to check myself the temperance and mastery of Camus as a cinema director, and on the other hand I could also appreciate the ductility of Paco Rabal and Alfredo Landa in two roles extremely difficult to play. This is not, on the contrary of what some people have claimed my first encounter with the cinema. With the cinema in its literay-technical side I contacted twenty years ago with the occasion of the dubbing into Spanish of the American movie “Doctor Zhivago”, that just a few days ago we could watch on TV again. Miy mission was very specific: revising in a litery and careful way the raw dialogues that I was handed in. So this mission had two main targets, first adapting those dialogues in a way that once they were dubbed into Spanish wouldn´t lose their effectiveness neither their euphony. The second of these missions was to adapt those revised dialogues as close as possible to the lip moves of the actors and actresses. A precise dubbing requires of these demands: that the sounds that a person produces on screen don´t result too short but neither they exceed the lip moves that the protagonists make. This task is not too difficult when it comes to adapt long dialogues but it becomes annoyingly complicated when we look at shor dialogues, where the reviser must limit to the number of syllables that the actors pronounce. In a professional dubbing it is not acceptable that an actor moves the lips without receiving any sound from them, but neither that we receive the sound without the actor moving the lips. So is, that if the raw translations results in a sentence of twenty syllables, whereas the English phonetics says the same sentence but producing only ten syllables, the person in charge of the dubbing, throughout the necessary sources, has to reduce to ten syllables a sentence that originally required twenty.

To this respect I remember in this movie a scene when a prissioners train was led to Siberia, one of the prissioners faces one of the guardians and tells him off with a sequence of short insults, three to be more specific. My duty in this case was to reduce to seven syllables those insults, and facing the difficulty to find in the Spanish language three words short and expressive enough, I opted to choose only two words but very resounding and conclusive: “lacayo y lameculos” (lackey and asslicker) the later a bit too harsh for that time which on the day of the premiere of the movie in Valladolid, made the woman sitting next to me in the theater to turn to her scort and said to him: “How funny you see, they also use the word lameculos in Russia!”.

This experience with dubbing was very useful for me since I have always been in favor of the braveness of the language, saying as much as you can with the smallest number of words. After this, another three colaborations of minor responsibility came along, such as the literary revision of movie scripts or perhaps a bit of advice in the shooting of some movies thathad any of my novels as theme. In this sense my first experience was El camino (The Path), movie which was directed by Ana Mariscal in the little village of Candeleda. I remember that I was surprised by the slowness of the creational process and also by the fact that the content was not filmed in a lineal way, from the beginning until the end, but on the contrary was filmed in segments and fractions without any logical sequencing. I also remember that the children would get tired because the filming took so long and it was very exigent, and when Ana Mariscal began the secene in which Daniel, el Mochuelo, leaves a thrush on the hands of his dead friend Germán, el tiñoso, the kid who played the role of Germán had fallen asleep inside the coffin, such a scene caused great distress in his mother who was observing the scene, but such anecdote made the scene much more credible. 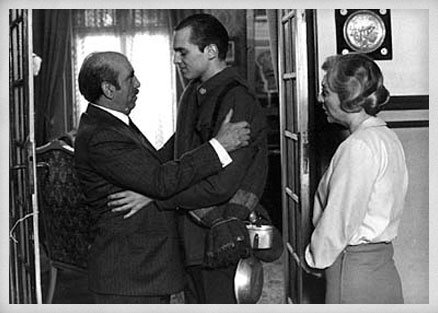 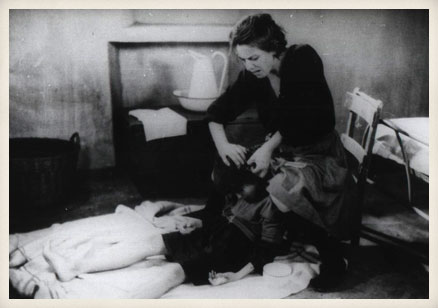 Retrato de familia directed by Giménez-Rico was the cinema adaptation of Mi idolatrado hijo Sisí, and with this movie the lesson was different. The novel has three hundred fifty pages, which is the equivalent of six or even eight time the length of a normal movie scrip, which in this case made the cutback rather extreme. Giménez-Rico solves the problem in a very wise way by reducing the plot to the third of the three books that conform the novel instead compressing the dialogues. He only certain flashbacks to the first books when it was absolutely necessary for him to introduce and describe any of the characters. I learnt another thing in Retrato de familia and that is that even if it is desirable to avoid an excess in erotic content, in this case images can be allowed to use a bit of this since they are mute and the camera leaks through the words as the rays of sun go thorugh a glass. Giménez-Rico taking advantage of the new period of liberalization, made the characters live the rawest scenes without changing a single coma in the script. Images spoke on their own when the words were paused.

Mi last two experiences have to do with La Guerra de papa, by Antonio Mercero adapted from my novel El príncipe destronado and Los santos iocentes, based on the novel with the same title directed by Mario Camus. The ashtonishing lesson from Antonio Mercero was that he took a three year old boy and got him to act in front of the cammeras as if it was the most natural thing for him to do. The first time that Antonio Mercero told me about his intention of adapting for the cinema El príncipe destronado, I told him that the main difficulty was finding a child to play the main character, that perhaps that could be solved by finding a wee mand with a child´s face to play the role of Quico. “I won´t surely do that”, Mercero said to me. If you manage to get through to the cild´s world, the child opens upt to you”. And indeed, Mercero entered that child´s world and made him move in a natural and spontaneous way, without the child even knowing what he was doing, in other words, he did it as a game. When Quico was acting in front of the cameras he was doing nothing but extending his normal life as a real child, all the games in the room next door. In the shooting of La Guerra de papa, Lolo García, was not acting, he was just playing a game. The amazing job of Mercero leans on the fact that he made seem as a game something that once was edited represented something much more serious.

It is equally amazing that Camus in Extremadura, was doing something similar but in his case with adults involved. Camus also tries to make them play, although the game, that game is not exactly the type of game is not part of the noemal activities of human beigns. That was the deifficulty in this movie. If it is difficult to make a child play when what he is really doing is work, it is equally difficult to make an adult pretend that he is playing when he is working instead. But camus achieves this and Paco Rabal- Azarías-and Alfredo Landa-Paco, el bajo- behave like children in the movie, the behave like “santos inocentes”, which was the only way to create the ideal atmosphere so the theme of the movie works, in other words, that the theme convinces and touches the spectators.